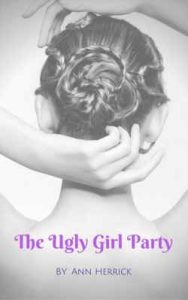 Faith’s wish to get off to a good start at her new high school is shattered on the first day, as she quickly discovers that drop-dead gorgeous Hunter and friends decide she lives in the “wrong” house and wears the “wrong” clothes. They systematically harass her and seem determined to make her life miserable. She fantasizes about how she’ll get even some day when she is a famous singer/actress, but meanwhile just wants to make it through the day. She meets a couple of possible friends, but finds it hard to trust anyone.

When maybe-friend Julia tells her about the upcoming talent show, Faith is determined to win in order to impress her tormentors. Then nice-guy neighbor Riley invites her to the homecoming dance. She’s excited to go until she gets there and realizes that something is up–something terrible. And when she reacts, she finds herself in danger of being suspended from school. Faith questions her own goals, decisions, and values as she struggles to find her way.

I love this book and I wish this book was in a series. I highly recommend this book .

True to her reputation as an excellent middle grade and young adult author, Ann Herrick has crafted another fine story, steeped with mounting tension (especially near the end) and believable characters. While these high schoolers in the sophomore class at Faith’s new school present a mixture of immature and mature behavior–typical of young teens–Faith’s display of confidence is an inspiration to young readers. Faith has challenges to overcome and she does so with her head held high. (Perhaps that is, in part, because she lost her mother two years prior to the beginning of the story and she has had to grow up quickly.)

… This is an inspirational story that portrays a strong young heroine dealing with the problem of fitting in at her new school in the face of bullying.

It’s never easy being the new girl at school, but Faith has a few extra challenges that most of her classmates do not.

Faith was a well-developed and interesting character. I really liked the fact that her flaws were so important to how the story progressed. Instead of being something minor and forgettable, they were actually serious issues that changed the way she saw the world and pushed her to do and say things she might not have otherwise done and said. Seeing Faith’s positive and negative sides only made me like her more because of how completely I got to know her and how much I could empathize with some of the things she struggled with…

Some of my favorites scenes involved the time that Faith spent with her talkative little sister, Erin. They had their share of disagreements like all siblings do, but they genuinely cared about each other at the end of the day. They also shared a lot more in common than either of them might have wanted to admit. Both of these things made it so much fun to see what would happen to these sisters next.

I’d recommend The Ugly Girl Party to anyone who would like to read a story about bullying and trying to fit in.
~~Astilbe, Long and Short Reviews

“… Faith, her sister, and her father had been studying the art of new beginnings since the death of her mother. As long as she held her head up high and stayed positive, Faith believed that all would be well. Unfortunately, her introduction to fellow classmates leaves Faith less than impressed when she is instantly marked as inferior in the eyes of the socially pretentious. What can Faith do to change their opinions and assure herself of a tolerable existence in this new life? Maybe she will win the school talent contest and just prove what she is worthy! The Ugly Girl Party by Ann Herrick reminds us of the injustices suffered during those adolescent years.

… I found myself nodding vigorously or smiling in recognition of Faith’s struggle to maintain a stiff upper lip while being true to herself. The high school years are a crucial part of character development and Ann Herrick is to be commended on this well-constructed novel of gritty entertainment. Since this is written in first person narrative, I found it easy to relate to the characters in the story. As Faith works her way through some important issues, this perspective gives the reader a front row seat to the action in the story. This is definitely on my YA book list!”

Home
Back To Top
×